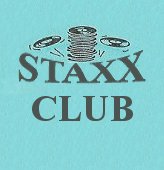 STAXX Club Manchester – Jimmy Savile (UK / Radio Luxembourg DJ and a notorious paedophile), used to own a club in Fountain Street, Manchester called the Three Coins, later renamed The Beat Club. It was not successful and became derelict. About a year later the end of 1966/7? Roger Eagle the DJ at the Twisted Wheel and Blue Note, opened it up as a Soul Club called STAXX. It didn’t last long as it mainly catered for the all nighter crowd from the Twisted Wheel who were in the process of ‘chilling out’ from the events on the night before. Roger’s entrepreneurial spirit continued with The Magic Village once the writing was on the wall and the lunatics were on the grass. His love of Soul continued, however and in the late seventies he opened Eric’s club (punk) in Mathew Street, Liverpool and in the mid 1980’s he was involved with Simply Red. Roger died in 1999 but can be seen on DVD disc one of The Strange World Of Northern Soul. Roger was a champion for Stax Records. He loved the Stax sound and when he was the Blue Note DJ he really let Stax rip, almost as if he had been held back at the Twisted Wheel which had become Motown dominated. The list of Stax tracks were just too large to list here: he played all of the greats. I especially remember him importing Grab This Thing by the Mat-Keys. It became his theme tune at the Blue Note and he carried this over to the STAXX Club. At Staxx he obviously played all his imported Stax repertoire singles and a few LP’s. He also kept up the SKA and Blue Beat. However the club was dark, echoing, usually empty and quickly closed.