The Lincoln Memorial, Manchester stands on what used to be The Twisted Wheel Club, Brazennose Street the place were the DJ Roger Eagle singlehandedly turned on a generation to Black American Music. 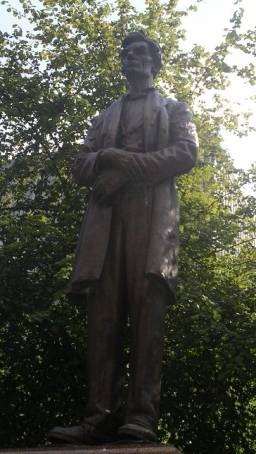 It all began here.

Abe Lincoln stands almost on top of the cellar that once was the original Twisted Wheel club in Manchester.

It has now named ‘Lincoln Square’ – just off Brazennose street which in turn is off Albert Square, Manchester’s Town Hall Square.

When the statue was being installed the foundations collapsed into the old cellar that was the Twisted Wheel,  the club where the DJ Roger Eagle almost singlehandedly turned on a generation to Black American Music.

In many ways  it is a fitting tribute to have Abe standing above the club, the man who freed the Negro slaves.  Their rejoicing, their spirituals their blues led to soul music, and that’s still going strong today – now given the name Northern Soul. It is our aim to keep the flame alive for as long as we are.

Yes he freed the slaves but freedom is still in 2015 a long continuing march.

see: The Music of Civil Rights.