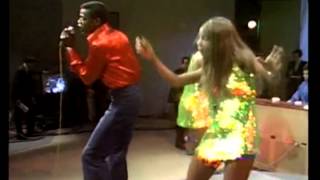 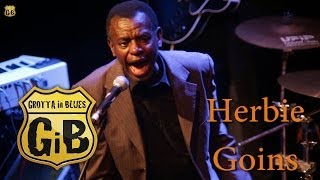 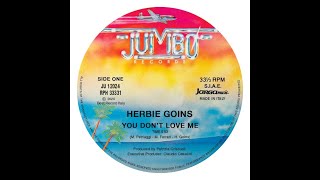 Herbie was a black singer who often appeared with Alexis Korner. Number One In Your Heart – Herbie Goins and the Nightimers (to my knowledge was his only release played at soul venues), was released in 1966 on the UK Parlophone label. He also did a version of Bobby Bland‘s Turn On Your Lovelight. He fronted the Alexis Korner band during their lengthy stay as the house band at the Twisted Wheel Club in 1964 (Manchester).

Herbie would sing James Brown and Charles Brown and Chuck Willis numbers. Alexis would sit behind him with his massive grin whilst playing guitar, Alexis even wrote a track in appreciation –  Herbie’s Tune.

Everyone who knew him said that he was a great guy. I remember having a conversation with him at the Twisted Wheel. He said he was off to sign for Motown. But that was the last that anyone ever heard of him in Manchester at that time. He did go back to the States (he was a GI who stayed in the UK after his national service) and recorded Number One In Your Heart.

Please, Please, Please the James Brown track was covered and released as the ‘B’ side in homage to James Brown, by Herbie Goins and Alexis Korner, who played it often in their weekly live sets in 1964/5 at the Manchester Twisted Wheel in Brazennose Street. Released on Parlophone UK the ‘A’ side was I Need Your Loving written by Don Gardner their intro track.

Spooky But Nice was Alexis Korner’s signature tune at the time 1964/65. Alexis Korner had a residency playing two or three nights a week at the Brazennose Street Twisted Wheel in Manchester -The Birth Place Of Northern Soul – I NEED YOUR LOVIN became their intro number sung by Herbie. However, my own particular favourite live performance number by Herbie Goins was This May be The Last Time – again a James Brown standard which he sang with great feeling.

I remember talking to him at the Twisted wheel, he said he was doing some solo stuff not with Alexis and that he was trying to get signed to Motown:

The following info on Herbie Goins is thanks to Nick Rossi:

‘Herbie Goins & the Night-Timers moved to Italy where they had a fair amount
of success in the late-60s. They stayed there until 1971 or so when all of
their instruments were stolen along with their transport, etc. Most of the
band moved back to the UK, while Herbie stayed in Italy. He currently lives
outside of Rome and still performs. The Night-Timers family tree is
massive, but they did manage an LP and several singles during their
existence, including a couple of Italy-only releases.

Ronnie Jones was the Night-Timers first singer from
Summer 1964 until early 1965 when he went off on a package tour leaving the
group behind in London to fend for themselves. His subsequent backing
groups were the Blue Jays and then the Q Set. With the latter he moved to
Italy as well, sometime around 1968-1968. Ronnie currently lives in Milan,
where he still performs and records. His 1960s discography is limited to a
dozen or so 45s. Coincidentally, I just heard from him and his new CD is
nearly complete.

All of the Big Roll Band material has been recently reissued on CD by
Repertiore Records (Germany) over 3 discs.’