Curtis Mayfield + you are you are + Curtom records promo LP UK 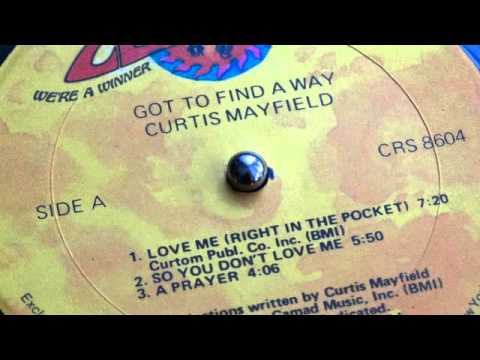 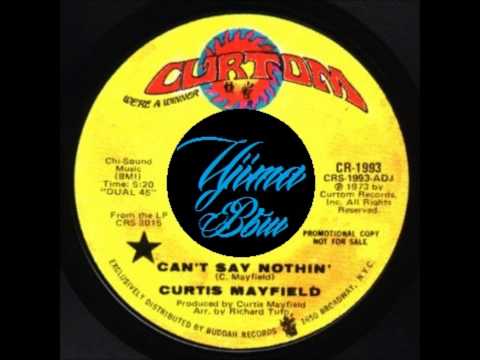 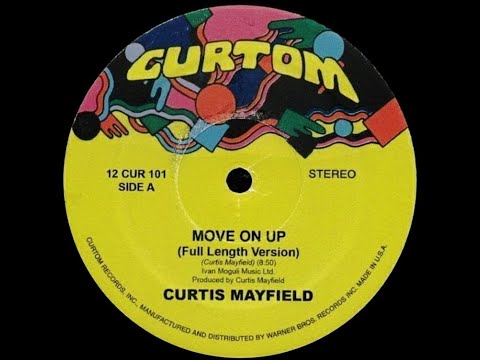 Curtom Records was started by Curtis Mayfield and Eddie Thomas – Eddie Thomas had been the manager of the Impressions.

LOS ANGELES — In a strategic move to bolster its already impressive urban music catalog, Rhino Records has purchased the Curtom masters from Curtis Mayfield for North America, it was announced today by Rhino President Richard Foos.

The catalog includes performances by Mayfield from 10 of his solo albums between 1972 and 1990, including the Grammyreg.-nominated “Superfly,” “Freddie’s Dead,” and “Junkie Chase” from the Superfly (Original Motion Picture Soundtrack) album.

In 1996, Rhino Records released People Get Ready! The Curtis Mayfield Story, a 51-track anthology featuring the best of Mayfield’s most brilliantly written and performed songs. As the three-CD box set’s liner notes state so succinctly, “Mayfield is a true icon within the realms of African-American culture, an American original, a modern griot who has made an immeasurable global impact on the contemporary music of close to four decades.”

“Curtis Mayfield is a true pioneer, both lyrically and musically,” says Foos. “As comprehensive a statement about his career as the People Get Ready project is, there is such depth and breadth to his music that we are anxious to create even more releases from his highly influential body of work.”

Says Mayfield: “I believed that in order to market our old masters to the entire marketplace including this year being the 25th anniversary of my Superfly album, we needed the expertise and commitment that Richard Foos and Rhino offered us. After experiencing how Rhino marketed my three-CD box set People Get Ready, I felt at home with Rhino.”

Born June 3, 1942, in Chicago, Mayfield began singing by age seven. A self-taught guitarist, he was inspired by his mother’s love of poetry and began developing his songwriting skills. In 1957, singer Jerry Butler invited a then 16-year-old Mayfield to join The Roosters, for whom Curtis wrote and composed music. Six months later the group was renamed The Impressions and a year after that, they hit the charts with “For Your Precious Love” and Mayfield’s professional career began in earnest.

By 1968, The Impressions had produced a run of more than 18 charted singles that positioned the group as one of the most popular R&B acts of the ’60s. Mayfield also established himself as a hit-maker for other Chicago-based acts and in 1970, he launched both Curtom Records and a solo career, beginning a new chapter in the Mayfield story.

Mayfield’s messages of social consciousness struck a chord with the African-American community who embraced his themes of romance, politics, and peace set against an organic, groove-laden backdrop of funky wah-wah-guitar, heavily percussive rhythms, and swirling strings.

Superstardom found Mayfield in 1972 when he scored and performed the music to the Superfly soundtrack, which went on to sell more than one million copies and receive four Grammy nominations. More than 20 years later, it is still considered one of contemporary black music’s most significant recordings.

Through the ’70s and ’80s, Mayfield continued to record new solo albums for Curtom, including Give, Get, Take And Have and Never Say You Can’t Survive; achieve chart success with tracks such as “Love Me, Love Me Now” and “Tripping Out” and the Linda Clifford duet “Between You Baby And Me”; produce artists such as Gladys Knight & The Pips, Aretha Franklin, and The Staple Singers; and tour in America, Europe, and Japan. In 1989 Mayfield contributed to two soundtracks and released the Curtom album Take It To The Streets, which featured the standout tracks “Homeless” and “Do Be Down.”

A life-changing tragedy struck in August 1990. While Mayfield performed onstage at an outdoor concert in Brooklyn, high winds dislodged an overhead lighting rig, which collapsed on him. The damage to his spine left Mayfield a quadriplegic, though he has continued to write and record. His most recent album is New World Order (Warner Bros., 1996). Today, the prolific artist lives in Atlanta with his wife and family.

Curtom was formed by Curtis Mayfield after he left the Impressions for a solo career. The Curtom releases were exclusively of the soul records genre, mostly produced by Curtis Mayfield or with a great connection either to him or to the Impressions. The first Curtis Mayfield albums released on this label are absolute soul gems. The distribution was first by Buddah Records, but in 1973, Curtom switched its distribution to Warner, then RSO. After the RSO deal ended, Curtom made some independent deals with Capitol Records and Boardwalk Records for some of their artists. In the late 1980s and early 1990s, Curtom was briefly reactivated through Ichiban Records, after which the entire catalog was sold to Rhino Records.

The label for the Buddah distributed series is yellow and orange with a red stylized “CURTOM” across a red and blue sun at the top of the label, and the sentence “WE’RE A WINNER” written in black letters under the Curtom logo. The following text is written in black lettering in the form of an arc at the bottom of the label: “EXCLUSIVELY DISTRIBUTED BY BUDDAH RECORDS – 1650 BROADWAY N.Y.C.” with a small Buddah logo (i.e., the famous “Shiva” statue) first between the words “Records” and “1650,” then between the words “Buddah” and “Records” when the address moved to “810 7TH AVE. N.Y.C. 10019.” For the 8600 series, this text changed to a lower case lettering.

When the distribution switched to Warner, the label remained mostly yellow, but the top half changed to a multicolored background with a yellow “CURTOM”. The text changed as well to “CURTOM RECORDS INC., MANUFACTURED AND DISTRIBUTED BY WARNER BROS. RECORDS INC.”

For the last two series, the distribution switched, first to Ichiban and then to Arista (which were mostly reissues).

As far as we know, all releases were stereo only. The track listing below is given in playing sequence whenever this information was available. For the albums whose catalog numbers are marked with an asterisk (*), the songs are given in alphabetical order because the exact playing order was not known to us. We would appreciate this information from anyone who has it.

We would appreciate any additions or corrections to this discography. Just send them to us via e-mail. Both Sides Now Publications is an information web page. We are not a catalog, nor can we provide the records listed below. We have no association with Curtom Records. Should you be interested in acquiring albums listed in this discography (which are all out of print), we suggest you see our Frequently Asked Questions page and follow the instructions found there. This story and discography are copyright 2000 by Mike Callahan.

CRS 8004 – The Best Impressions: Curtis, Sam and Fred – Impressions [1970] The track lineup given on the back of the record jacket is incorrect. The correct playing order is given here. The Impressions hits from the ABC-Paramount days are remakes on this album. Gypsy Woman (S, remake)/Keep On Pushin’ (S, remake)/I’m So Proud (S, remake)/Say You Love Me (S)/I’ve Been Trying (S, remake)/Amen (S, remake)//Choice Of Colors (S)/Fool For You (S)/Wherever You Leadeth Me (S)/Mighty Mighty Spade And Whitey (S)/Gone Away (S)/This Is My Country (S)

CRS 8007 – The Baby Huey Story/The Living Legend – Baby Huey [1971] Baby Huey and the Babysitters were legendary nightclub performers during the 1960s in the Chicago area. Listen To Me/Mama Get Yourself Together/A Change Is Going To Come//Mighty, Mighty/Hard Times/California Dreamin’/Running/One Dragon Two Dragon

Born on November 5, 1931, Eddie Thomas was destined to succeed. In 1957, while attending a local talent show at the Washburne Trade School in Chicago, he met and was asked to manage two vocal groups, The Medallionaires and The Roosters. Moved by their unique sound, Thomas convinced members of The Roosters to change their name to The Impressions and the group’s career skyrocketed with the release of their first single, “For Your Precious Love.”

Thomas would also find another great talent in the person of Curtis Mayfield, with whom he enjoyed a long association. Together they formed Curtom Records and produced many hit records, including “Keep on Pushing,” “Amen” and “It’s All Right.” The multitalented Thomas continued to produce new artists and shepherded groups, such as The Independents, to fame. Their first release, “Leaving Me,” sold more than 1 million records.

In the mid-1970s, he created Thomas Associates, a successful record promotion business whose elite list of clients included Ray Charles, Barry White, Quincy Jones, the Stylistics and Johnny Taylor. Later, he formed A-1 Creative Productions company, which produced the video and wrote the theme song for the 1987 NFL World Champion New York Giants. In 1990, Thomas was bestowed broadcasting’s highest honor, the prestigious James Foster Peabody Award, for his role in the music documentary, The Rise and Fall of Vee-Jay Records.