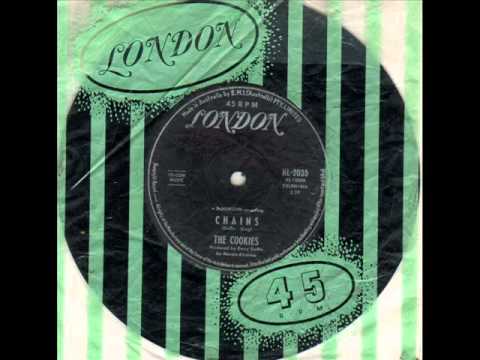 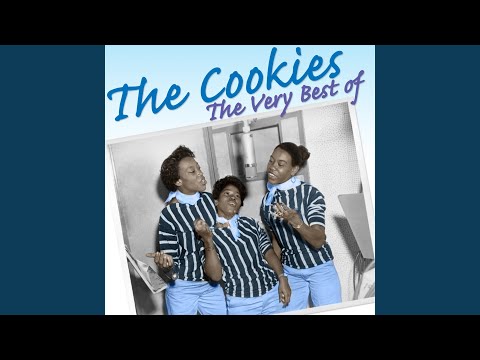 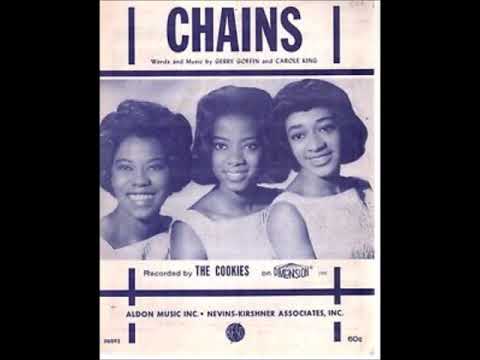 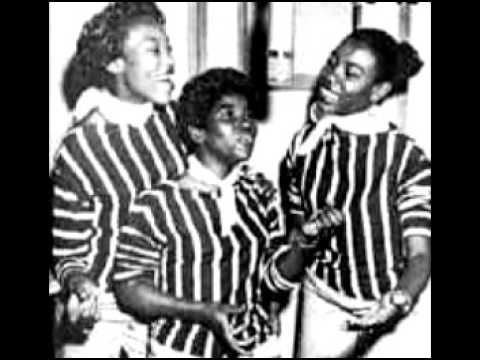 The Cookies recorded Chains which was first brought to the attention of the UK record buying public by the Beatles, who did the song on their second LP: With The Beatles. Even so it reached the bottom half of the UK charts in 1963. The Cookies’ track was played quite often at the original Twisted Wheel in Manchester.

The Cookies did backing vocals on most of Little Eva’s Hits. Earl-Jean, the groups lead singer had a major USA R ‘ n B hit with I’m Into Something Good (written by Goffin/King and covered by Herman and The  Hermits in the UK, which then outsold the original (superior version) in the USA!

The original Cookies were Margie Hendrix, (who was also a Raelette [Raylette] and who recorded Restless a massive Manchester soul club hit), Ethel ‘Earl-Jean’ McCrea and Pat Lyles. They recorded for Lamp (Aladdin).  In 1955 they signed to Atlantic. They recorded three sessions as The Cookies – one track became a Top Ten R ‘n B hit In Paradise way back in 1956. They also backed Joe Turner and Chuck Willis on their hit recordings in 1956 before becoming The Raelettes, Ray Charles?s backing singers.

Six years later a new trio formed as The Cookies on the Dimension label, with only Earl-Jean McCrea from the originals line up. They did backing vocals for Neil Sedaka, Little Eva, and Carole King, 1963, Don’t Say Nothin’ Bad (About My Baby)  followed by Girls Grow up Faster than Boys.

The Cookies were started at Lamp Records by Margie Hendrix, Don’t Let Go was their first recording. The Cookies were a leading studio group backing hundreds of artists through the years.

The Cookies, were friends of Carole King and Gerry Goffin’s babysitter, one
‘Little Eva’ Boyd. After they wrote The Loco-Motion for her, they wrote this for her
friends. Peaked at Number 17 in 1962, later covered by the Beatles as an album track in 1964.

Song Lyrics of Chains  as performed by The CookiesChains, my baby’s got me locked up in chains
And they ain’t the kind that you can see-ee-ee-ee
Whoa, oh, it’s chains of lo-o-ove
Got a hold on me, yeah

Chains, well, I can’t break away from these chains
I can’t run around ’cause I’m not free-ee-ee-ee
Whoa, oh, these chains of lo-o-ove
Won’t let me be, yeah

Now, believe me when I tell you “I think you’re fine”
I’d like to love you but, darling, I’m imprisoned by these

Chains, my baby’s got me locked up in chains
And they ain’t the kind that you can see-ee-ee-ee
Whoa, oh, it’s chains of lo-o-ove
Got a hold on me, yeah

I wanna tell you, pretty baby, “your lips look sweet”
I’d like to kiss them but I can’t break away from all of these

Chains, my baby’s got me locked up in chains
And they ain’t the kind that you can see-ee-ee-ee
Whoa, oh, it’s chains of lo-o-ove
Got a hold on me, yeah