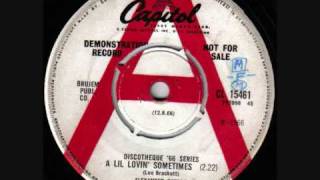 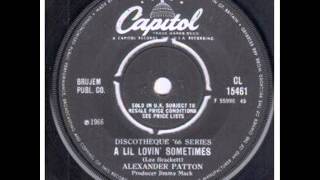 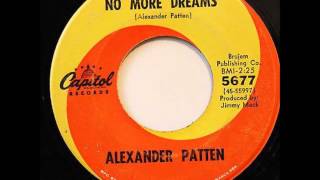 No More Dreams – Capitol (B side)

Alex Patton sang one of the most influential Soul All Nighter classics – A Lil Lovin’ Sometimes.

He is probably the sharpest and best performer live on the DVD Soultrip USA 2004 so he is still going strong. On the DVD he sings A Lil Lovin Sometimes in a smart tuxedo. This track was huge at the Twisted Wheel from 1966 onwards.

Kev Roberts the famous Northern Soul DJ was responsible for the Soultrip DVD and organising the trip.

Unfortunately the quality is fairly poor, the sound is atrocious and the lighting? non existent but an excellent idea nevertheless.

One of the inaccuracies on the DVD is the statement that Alexander Patten only became popular with A Little Lovin Sometimes at the Twisted Wheel in 1969. In fact, it was in 1966. And it was a H U G E player at The Wheel, and Blue Note. Kev Roberts puts it astonishingly at 51 on his Top 500, on ours it would probably be in the top ten. The ‘B’ side “No More dreams” was also brilliant.