Long John Baldry played live at the Old Twisted Wheel, Manchester. He was part of The Steampacket and other groupings, notably Julie Driscoll, Brian Auger, Rod Stewart. Steampacket was allegedly formed one night at the Twisted Wheel after watching Brian Auger playing a set.  After the inevitable break up of the group he joined Bluesology with backing from a totally unknown musician – Reg Dwight – known better today as Elton John who took the John part of the name from Long John and the Elton part from Elton Dean the Bluesology sax player.

Long John started out by singing with Alexis Korner, Blues Incorporated, then the Cyril Davies R&B All Stars. After Cyril’s death the group was renamed Long John Baldry and His Hoochie Coochie Men in early 1964. Rod Stewart joined and affectionately nicknamed the group ‘The Hoochi Coochi Ladies’. 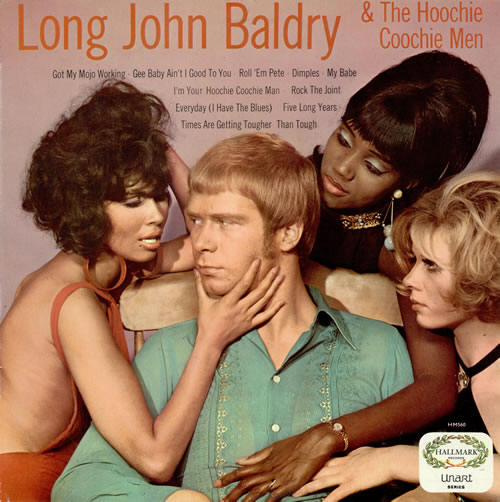 Definitely a publicity shot – Long John Baldry was gay and often spotted in Manchester’s
Rembrandt Hotel when he was in town.

Do our eyes deceive us, or is that Joanna Lumley on the right of the picture? Either way, Long John remains unmoved.

Rod and Long John would often be seen having a couple of pints in the Nags Head or the Rising Sun just along the street at the back of the Brazennose Street Twisted Wheel, Manchester.

1967 Let the Heartaches Begin made it to number one in the UK pop charts and Long John lost his reputation for being a bluesman and became a bona fide popster. His song Mexico which was the anthem for the Olympic Games only made matters worse, I’m afraid.

Appearing on RSG he used to sing whilst holding the collars of his jacket for some reason. I was once invited to a party in the upstairs room of the Rembrandt Hotel in Manchester. There was Long John with a full length leather coat and a Rembrandt type floppy hat for some  reason. It has to be said, he was very tall.