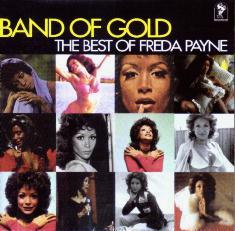 In Detroit Freda had been friends with ‘HDH’; Brian Holland, Lamont Dozier, and Edward Holland, Jr and they asked her to sign with their newly-formed record label Invictus, which they had started after a royalty payments dispute with Berry Gordy resulting in the trio leaving Motown.
.
In 1969 her first Invictus single Unhooked Generation was released. Then writers  Edythe Wayne and Ron Dunbar brought the song Band of Gold to her. Initially due to the lyrics about a broken marriage ending on the wedding night, Freda did not want to record it, but was eventually persuaded by the producers and songwriters. In 1970 it became a smash hit reaching 3 in the US and 1 in the UK and became a gold record.

Years later in 1990 she recorded three songs for Ian Levine‘s UK Motorcity label, a remake of Band of Gold, Memories and Souvenirs and Only Minutes Away.